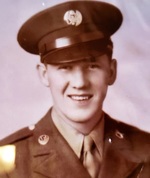 Born in Paisley, Scotland, Cyril was the son of the late Robert and Margaret (Adams) Marr. Cyril emigrated to the United States with his family in 1929 on the ship the Transylvania.

A graduate of Draper High School, Cyril entered the U.S Army in 1942 and served in the infantry in the Pacific Theater. He was wounded in a battle on the Island of Moratai. A recipient of the Purple Heart, the Bronze Star, Cyril also received the Combat infantry Badge.

A employee of the federal government for over 40 years, Cyril worked for the Scotia Naval Depot where he retired as head Transportation Officer. He was a active member of the Disabled American Veterans Chapter 24 and Chapter 88, holding many offices including Commander, he belonged to the Purple Heart, the VFW, the Board of Management WWII Veterans of Schenectady, the Saratoga Military Museum and Midway Fire Department where he was a trustee for over 25 years. Cyril was also a member of the Caladonian Society, Clan MacCrae, a volunteer with the Capital District Scottish Games, the Elks and an usher and member of Our Saviors Lutheran Church in Colonie for over 50 years.

Cyril was married in October of 1948 to the love of his life Doris Kenyon Marr who passed in December of 2018. He is survived by his children; Janet Plourde (Peter) of Colonie and Robert Kenyon Marr (Jacqueline) of Schenectady, his grandchildren; Kathryn A. Shoemaker, James Kenyon Plourde (Michelle) and Robert K Marr (Sarah), great grandchildren; Alyssa and Grant Shoemaker and Ceileigh and Cadence Plourde and his niece; Margaret Jean Voss Sprink of Arizona.

Contributions may be made in Cyril’s memory to either Our Saviors Lutheran Church, Mountainview Terrace, Colonie, NY 12205 or to Disabled American Veterans, Chapter 88, Schenectady, NY.

All rights reserved. This obituary is also archived at obittree.com