To share your memory on the wall of Earl Molloy, sign in using one of the following options:

Provide comfort for the family of Earl Molloy with a meaningful gesture of sympathy.

Print
Earl W. Molloy, 85, of Rotterdam passed away on Monday February 4, 2019 surrounded by his loving family. Born in Schenectady, he was the son of the late James F. and Lucy (Roth) Molloy.

He proudly served his country in the US Navy from ... Read More
Earl W. Molloy, 85, of Rotterdam passed away on Monday February 4, 2019 surrounded by his loving family. Born in Schenectady, he was the son of the late James F. and Lucy (Roth) Molloy.

He proudly served his country in the US Navy from 1950-1971. During his career in the Navy, Earl was deployed on the following ships: Myles C. Fox, Marias, Truckee, Watchman and Fechteler. When discharged he held the rank of Chief Machinist’s Mate.

Earl was a master carpenter and was employed by Van Patten Builders. He also spent time working for Bellevue Builders in Rotterdam.

He was an avid radio collector and enjoyed woodworking and simply “working” with his hands. Earl was also a member of the Fleet Reserve Association.

Earl was a member of St. Paul’s Episcopal Church in Schenectady.

He was a loving family man who especially cherished his loving wife Jean.

Funeral services for Earl will be Monday February 11, 2019 at 10:30AM at the Bond Funeral Home 1614 Guilderland Avenue Schenectady. Visitation will be Sunday evening 5-7PM at the funeral home.

Internment with military honors will be at the Gerald B.H. Solomon-Saratoga National Cemetery in Schuylerville.

Contributions can be made in Earl’s memory to the Wounded Warrior Project PO Box758517 Topeka, Kansas 66675-8517 or the charity of one’s choice.
Read Less

We encourage you to share your most beloved memories of Earl here, so that the family and other loved ones can always see it. You can upload cherished photographs, or share your favorite stories, and can even comment on those shared by others.

Sue, Bill and Lily Jerome sent flowers to the family of Earl W. Molloy.
Show you care by sending flowers

Posted Mar 06, 2019 at 11:28am
I’m sorry for your loss, it can be hard to lose someone close to you. I wanted to share a hope with you for the future from the Bible. It is at Revelation 21:4, which gives us reassurance that God will one day take away sickness, disease-caused pain and tears of sorrow. We will all one day live in peace. If you would like to learn more or have any questions, please go to the official website JW.ORG.
Comment Share
Share via:
Posted Feb 09, 2019 at 09:46pm
The friends of Kimberly and Pierre Denis at the Federated Church of Orleans have made a donation to the Wounded Warrior Project in memory of Earl Molloy. We send our prayers for comfort for the family.
Comment Share
Share via:
SJ

Posted Feb 08, 2019 at 05:23pm
Please accept our most heartfelt sympathies for your loss... Our thoughts are with you and your family during this difficult time.

Flowers were purchased for the family of Earl Molloy. Send Flowers 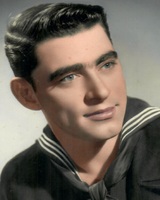