To share your memory on the wall of John Pierce, sign in using one of the following options:

Provide comfort for the family of John Pierce with a meaningful gesture of sympathy.

Born and educated in Schenectady, John was the son of the late Cassius and Carolyn (Harris) Pierce and a 1950 graduate of ... Read More
John Cassius Pierce Sr.,86, passed away Wednesday evening March 13th at the Glendale Nursing Home in Glenville, NY

Born and educated in Schenectady, John was the son of the late Cassius and Carolyn (Harris) Pierce and a 1950 graduate of the former Mont Pleasant High School.

John was employed at GE from 1950-1959. In 1960 he began a 32-year career with the Schenectady Police Department retiring in 1992 as an investigator. In his retirement John continued to work as a funeral director’s assistant with Bond Funeral Home for over 19 years.

John was a member of First Reformed Church of Scotia and sang in church choirs for over 70 years. He was also a lifetime member of over 60 years of the Glendale Fish and Game Club.

A visitation for family and friends will be held at the Bond Funeral Home, Broadway & Guilderland Ave., Schenectady, NY on Friday evening March 22nd from 5 to 7 pm.
A celebration of John’s life will be held on Saturday morning March 23rd at 10 am at the Frist Reformed Church of Scotia, 224 N. Ballston Avenue, Scotia, NY.

In lieu of flowers contribution’s in John’s memory may be made to the First Reformed Church of Scotia.
Read Less

Receive notifications about information and event scheduling for John

We encourage you to share your most beloved memories of John here, so that the family and other loved ones can always see it. You can upload cherished photographs, or share your favorite stories, and can even comment on those shared by others.

Posted Jun 16, 2019 at 11:39am
Happy Father's Day Poppy, This is the first Father's Day in my life without you! How i wish you were here to spend it with!! I miss you so much! I think of all you did for me my whole life, you were the best Dad anyone could ever ask for! At least you're with "PaPa", your Dad, so you can spend this special day together. Hugs & Kisses Pop, I Love You, Gail
Comment Share
Share via:
GR

Posted May 27, 2019 at 12:19pm
Happy Memorial Day Dad, Wish you were here to have a picnic & play some bocci ball with! It's a gorgeous, sunny day.
Miss you & Love You Always, Your daughter Gail XOXO
Comment Share
Share via:
R

Posted Mar 22, 2019 at 02:49pm
To the Pierce Family,
I am really very sorry to learn about John passing away. He was one of the nicest gentlemen I had the privilege to work with on the Schenectady Police Dept. He was a cheerful, patient and kind person who tried his very best to help everyone he came in contact with. He was also a man of humor in that he would say to me before the wonderful church roast beef dinners, "Ray, I'll give you ten dollars to stay home".

He was a good cop and he will truly be missed. May God Bless his soul and help all of you through this very difficult time in your lives.
Sincerely,
Ray Wemple ( Retired- Schenectady PD)
Comment Share
Share via:
SA

Posted Mar 22, 2019 at 07:58am
John was a friend of my parents. He was always very happy and helpful when ever I saw him. He had an immediate way of making you feel special. He was truly an exceptional person and one that I was proud to know.
Your family are in my prayers,
Sylvia Petraske Armer.
Comment Share
Share via: 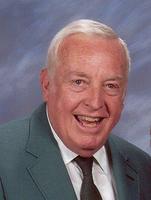