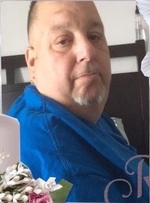 Born and educated in Schenectady, Robert was the son of the late Herbert and Marilyn (Schwartz) Kleitzel and attended schools in New York City.

A former wrestler, Bob enjoyed watching the wrestling shows on TV and was devoted to his family.

Bob is survived by his companion and partner of more than 10 years Mary Billings Kleitzel, his children, Joshua and Kimberly Kleitzel of Schenectady and Sheryl Policar of Kansas and a grandchild, Gallataea Policar

A celebration of Bob's life will be held on Friday November 8th from 12 noon to 1 pm at Bond Funeral Home, Broadway & Guilderland Avenue, Schenectady, NY. A service will begin at 1 pm at the funeral home.

All rights reserved. This obituary is also archived at obittree.com